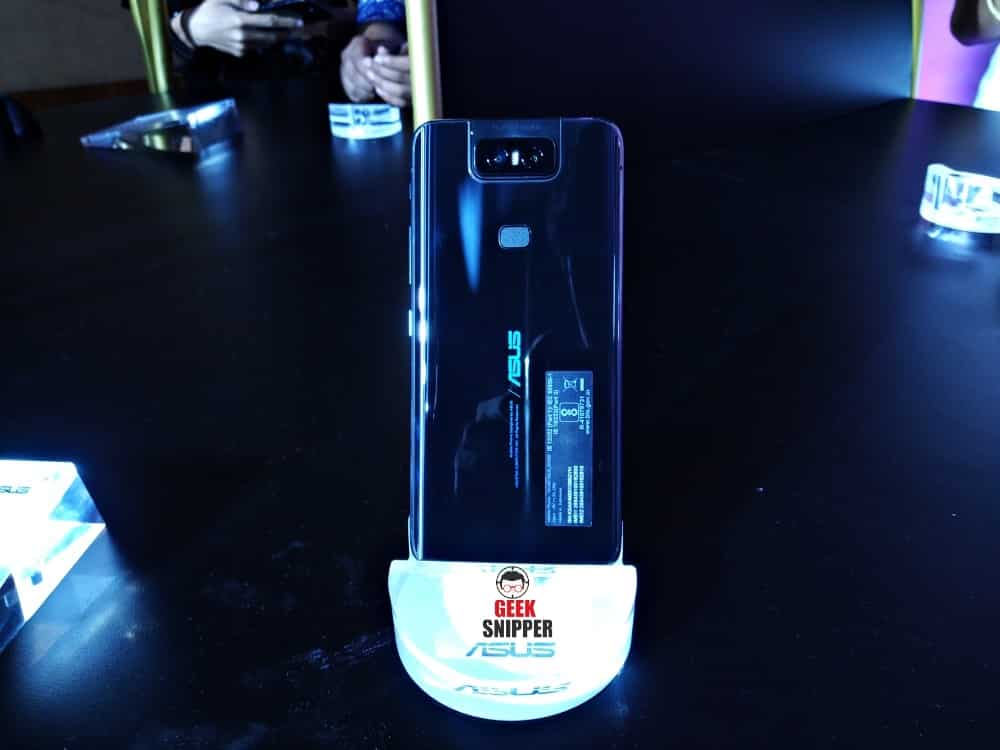 ASUS has recently launched its latest flagship to the Indian market but, unlike the International market, it’s known as ASUS 6Z in India. To the rest of the world, it is known as the ASUS Zenfone 6. I got to spend some time with it during the launch event & I thought that I should share a few glimpses of my ASUS 6Z hands-on session & give you my super early thoughts on it.

The first thing that you need to know about the ASUS 6Z is that it’s quite a bit of a unique device. It has no notch but, that was actually achieved by implementing a Flip-out Camera instead of a Pop-up camera & it is one of the only flagships to have a 5000 mAh Battery. The 6Z doesn’t have an AMOLED Display or an Under-display fingerprint scanner but, ASUS says that these decisions were made entirely to keep the price in control. 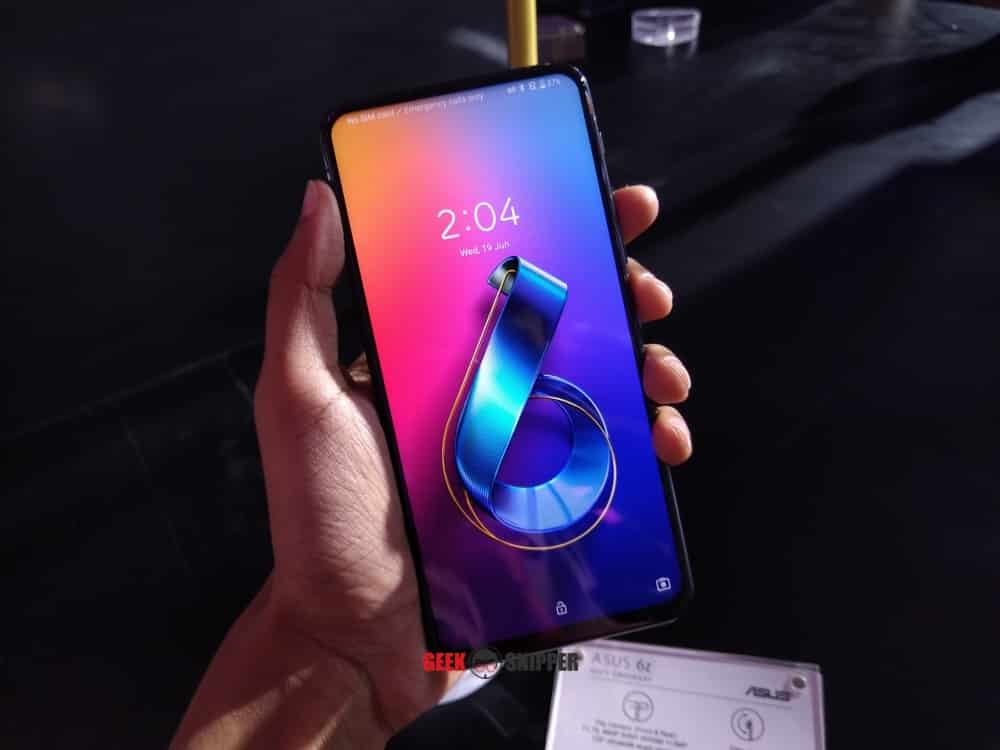 It has a 6.4 inch Full HD+ IPS Display with a 92% screen to body ratio. The chin is pretty thin but, we’ll still say that the one on the OnePlus 7 Pro is thinner. The good news, on the other hand, it supports HDR10, the brightness goes up to 600 nits & ASUS says it covers 100% of the DCI-P3 color gamut. 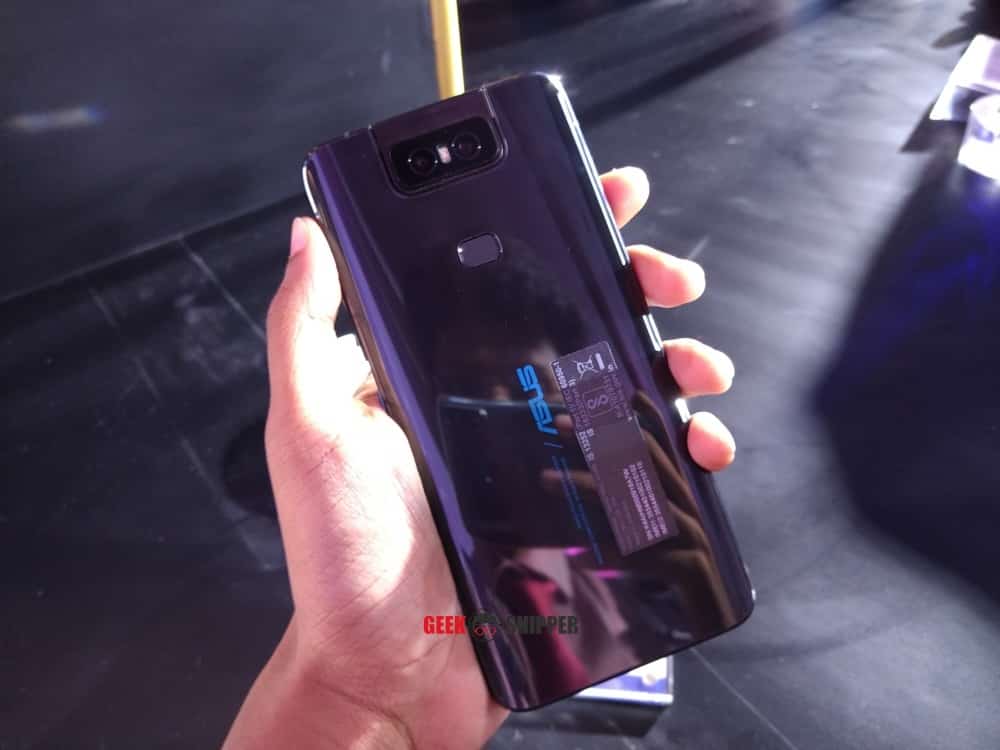 The Display is protected by Corning Gorilla Glass 6 but, the back panel is actually made of Gorilla Glass 3. So, the level of protection on the back isn’t as good as the Front but, thankfully ASUS will ship the 6Z with a transparent hard case in the box. So, that should add some protection to it.

The next & most important feature of this phone is the Flip Cameras. So, what it does is that it flips the entire rear Camera module 180 degrees to use those same pair of Cameras as the Front Facing cameras. We had some questions about the durability of this module but, ASUS says that it’s made of liquid metal & it’s actually pretty durable. They showed us footage of the module being extensively abused & still working perfectly but, we’ll have to see it in real-life to make any further decisions. The flip camera can be adjusted to a total of 90 angles (2 degrees per movement) & it is controllable via. an icon on the Camera app or the volume rockers. ASUS calls this the Free-angle Camera. 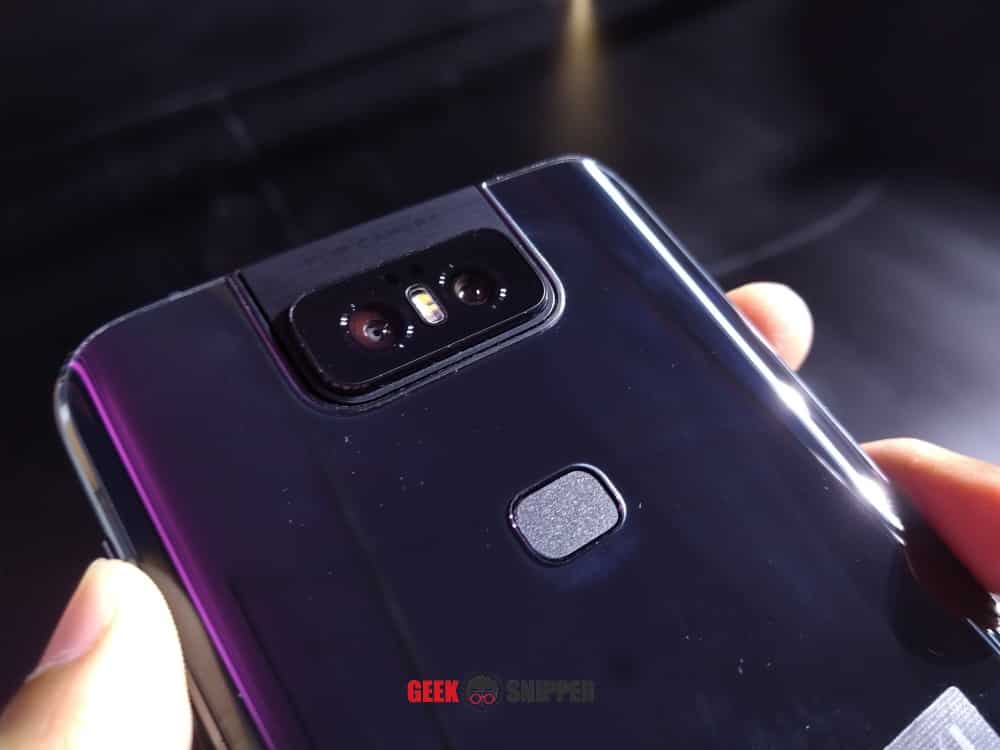 The main camera is powered by a 48MP Sony IMX586 sensor, it has an f-1.79 aperture lens but, because of the flip mechanism, there is no OIS this time. The secondary camera is a 13 Megapixel sensor with a wide-angle lens & an aperture of f-2.2.

Both of the Cameras support 4K video recording so, 4K wide-angle vlog is a thing for this device. ASUS kept the slow-motion capabilities to 480 FPS at 1080P so, no fancy 960 FPS here. But, you can use the Free-angle Camera even in slow-mo shots so, that’s pretty cool. 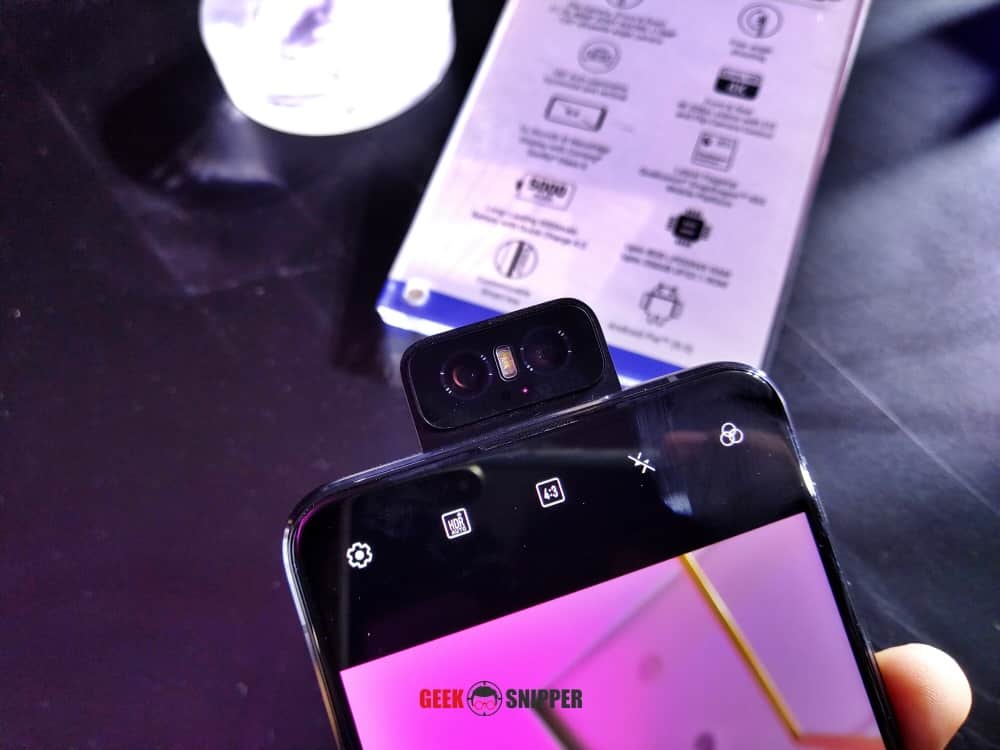 It also works in apps like Instagram so, it might give a different perspective of shooting right inside these apps. Also, you definitely know about the Panorama feature where the flip module just takes the whole panorama without you need to move your hand around.

It has a 5000 mAh Battery as I mentioned earlier & it supports Quick Charge 4. But, the power brick they supply in the box is just 18W which is kinda the standard rating for QC 3. I asked ASUS why & they said that it is indeed built on Quick Charge 4 technology but, with 18W charging, they can retain they can preserve the Battery’s overall lifecycle & capacity over the years. They said that after two years the Battery will still have about 4550 mAh Battery Capacity left with the 18W charging but, if they’ve gone with something like 27W charging the drop would have been the way more massive. Oh, and they now also support 10W Reverse Charging but, there is no Wireless Charging support.

ZenUI 6 is a major improvement over the ZenUI 5. It has been completely revamped & it’s now close to stock Android. It comes with a native Dark Mode built-in now so, thank you for finally implementing this ASUS. 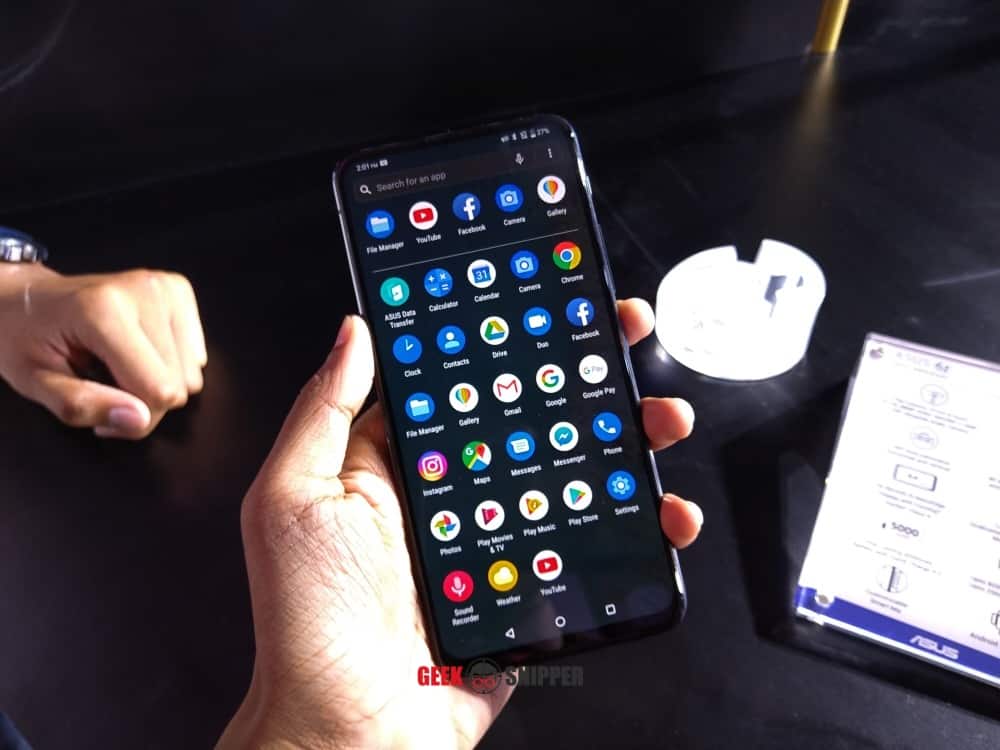 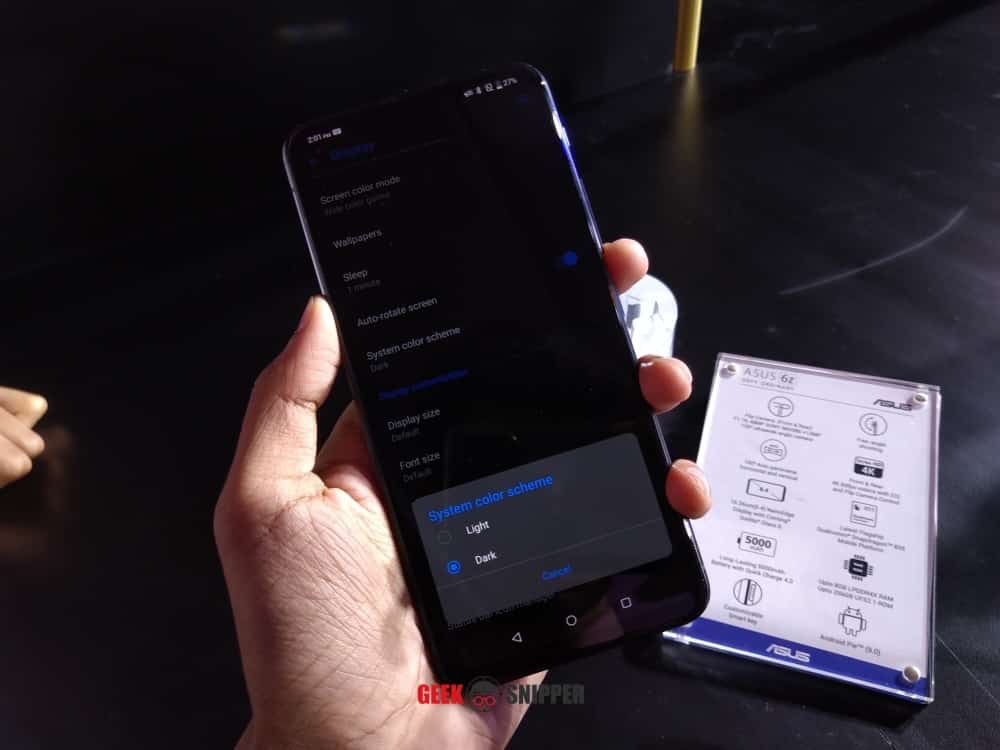 During my hands-on session with the ASUS 6Z, I also noticed that it has Digital Wellbeing which was quite a surprise. Till now Google has only allowed this app in Pixels & Android One smartphones. But, as you know, the ASUS 6Z is neither of those. 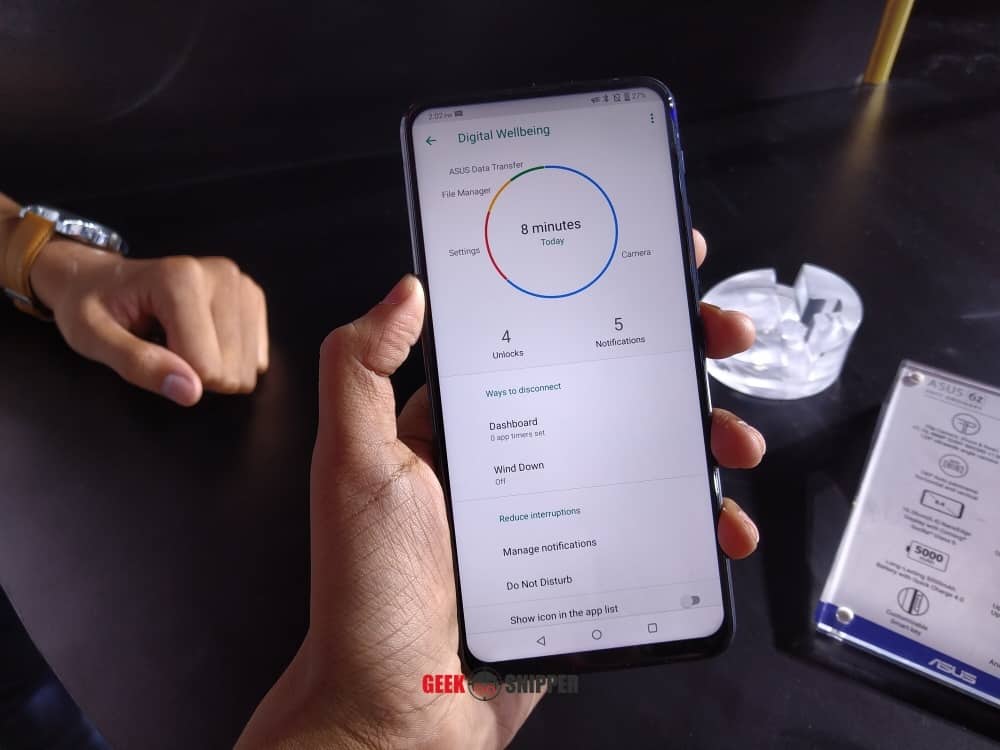 The device currently runs Android 9 Pie but, ASUS did promise to update it to Android Q & Android R once they’re available.

There are some things that they retained that other manufacturers are kinda doing away with. They kept the Headphone Jack & the support for Hi-res Audio, they are supplying a Hi-res supported earphone in the box, there is FM Radio, a Notification LED, Triple slots for two sims & a dedicated MicroSD card and they also support Widevine L1 & Camera2api.

The device looks pretty good and it’s a solid & chunky phone with a nice weight to it. So, the moment I picked it up at the ASUS 6Z hands-on area, it felt premium in hand. The Cameras were pretty fun to play with but, to comment on the quality, I have to test it out properly first. So, wait for the full review I guess. Also, the pricing for India was increased by 3,000 INR for all of the models which is a little weird to me considering the US & UK pricing were exactly the same as last year’s 5Z. So, if we convert the pricing to USD, it’s about $43 increase but, that’s still something I thought that I should point out.

That’s all for my ASUS 6Z Hands-on. Hopefully will be back with a full review soon. What are your thoughts on the ASUS 6Z? Let us know in the comments section below & share this article with anyone who might be interested in this device. If you have any specific questions, please let us know. We’ll definitely help you out with that in the comments section & we’ll answer some of them directly in the full review of this device.