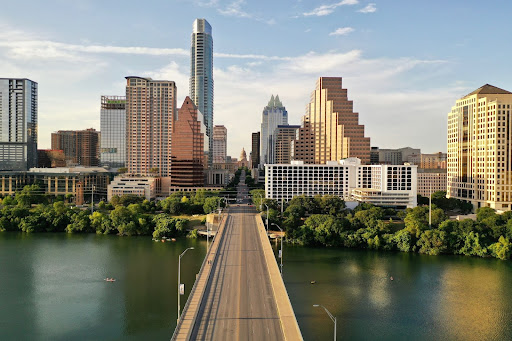 Like many other metro areas, office space in Austin is down as purchasing, and leasing activity has stalled. Despite the addition of substantial inventory this quarter, high-interest rates and inflation make purchasing hard to justify.

Vacancies are also slightly up, despite the relatively low unemployment in the state. Most notably, sublease vacancies were up the most they have been in the past five quarters. Fortunately, asking rates are still rising as landlords offer attractive packages to entice renters in high-demand markets.

Austin is the capital city and fourth most populated city in Texas, with a population of 996,147 as of 2022.

The average age in Austin is 33, and the median household income is $75,752. Since the 1990s, Austin has become a major hub for tech companies, giving it the nickname “Silicon Hills” in reference to Silicon Valley. Several Fortune 500 companies have regional headquarters in the city, including AMD, Amazon, Google, Tesla, and Whole Foods.

Austin itself sits at the foot of the Balcones Escarpment faultline near the Colorado River. The city exists within four separate ecological zones and has a unique climate characterized by long, hot summers and short, mild winters. Temperatures in Austin routinely reach the high 90s during the height of the summer.

Austin was founded as the capital of Texas in 1839 and named after Secretary of State Stephen F. Austin. After the Civil War, the city became an important railroad town and education center with the founding of the University of Texas at Austin. Today, the city is known for its tech-oriented economy and vibrant cultural scene.

Unemployment levels have decreased to just under 3%, lower than the national average. However, leasing rates have stalled because companies are having a hard time getting workers back into the office.

One of the main things explaining this slow activity is capital market hesitation due to rising interest rates. Office space isn’t the only sector hurting either—industrial and multifamily property markets are also seeing lower levels of activity. Experts expect activity to remain slow through Q4 2022, but activity might increase in Q1 2023 if interest rates stabilize.

The subpar increase in office rents is due to a general slowing of leasing activity. Office demand is low due to companies adjusting to hybrid work schedules. Aside from the CBD, the submarkets with the highest average asking rates were East Austin, South Austin,  West Central, and Central, at $57.90, $51.79, $50.63, and $48.90 per square foot, respectively.

Purchasing and leasing activity are down significantly, and vacancy rates are rising. Specifically, the East, South, and Northeast submarkets reported vacancy rates of 29.0%, 25.2%, and 22.8%, respectively. Vacancy rates are a result of work-from-home scheduling as well as personnel cuts and hiring freezes.

Despite the generally slow activity, transactions are still happening in a handful of submarkets that traditionally have high demand, such as the CBD and surrounding downtown areas. The CBD and Southwest markets saw the highest subleasing activity at 19% each.

Despite the slow quarter, Austin’s office space markets had a handful of notable real estate transactions, including:

The low number of sales and leases in this quarter indicate that property owners are on the defensive and plan to hold until at least Q1 2023.

Office space construction has stalled in some markets due to uncertainties with financing and rising interest rates, though the city still has some notable construction projects underway.

In addition to the above constructions, development on the 700,000 square foot Waterline Tower is progressing and is expected to be completed in 2026.

High-interest rates, rising vacancies, and low purchasing activity indicate Austin will experience a downturn for the time being. Capital market uncertainty could cause delays in undergoing construction projects, while leasing activity will continue to be slow from low demand for office space.

Additionally, investors can expect to see large amounts of subleasing to fill empty space. Otherwise, activity will remain low for the foreseeable future. Fortunately, Austin has typically avoided the worst of past recessions, and experts believe the downturn will be less severe than in other parts of the nation.

The low activity means that investors should take a defensive position. Conditions are not bad enough that landlords should consider selling at a discount, but landlords will need to manage vacant space by offering enticing subleasing packages.

Going into 2023, the focus should be on acquiring high-quality Class A office space that can entice workers to get back into the office. Landlords with a large inventory of shell space of class B office space might struggle to find tenants.

As always, be diligent and do your research before investing!

What to Expect in a Diversity And Inclusion Training?

Why Is There A Need To Associate With Pick And Pack Fulfillment Services?

MDM: How to Build and Deliver Trusted, Relevant, and Authoritative Information Across…

Why Insurers Put Customers at the Center of Their Business