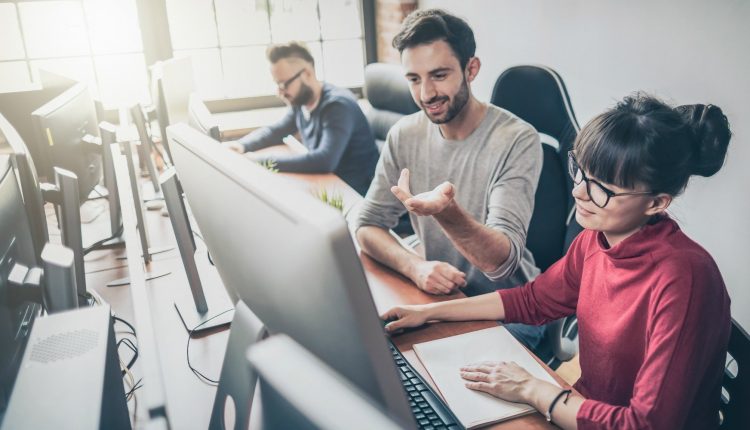 At the beginning of their career, nearly every would-be software developer Googles “What coding and programming language should I learn?” And even now, more than 30 years after its inception, Python still lands on every top 5 list of programming languages. Year after year, the Stack Overflow survey repeatedly ranks Python as one of the most desired coded languages in the world. That’s because many of the most popular — and profitable — businesses online are built on the back of Python. This is why so many businesses are looking to hire Python developers.

Python has proven its staying power, with its popularity only growing in the banking, finance, healthcare, information technology, and entertainment sectors. Here are the most compelling reasons why Python is so popular, and what to screen for when you hire Python developers for your next project.

Why is Python so Popular?

It’s easy to learn: Python is universally praised for its ease of access and readability, since it is constructed similarly to English, making the syntax easier for programmers to recognize and interpret. This creates a stable pool of tech talent familiar with the language, making it easier for businesses to find and hire Python developers.

It’s well-supported: Resources are widely available for learning about Python and problem-solving, with an array of guides, tutorials and documentations downloadable for free. There is even a free style guide for coding optimally with Python, called PEP 8.

It’s free! Python is open-source and freely available, even for commercial use. Startups in particular often select Python for this reason.

It’s flexible and versatile: Python can be used in applications as varied as website and game development, data analysis, and machine learning. Businesses find it advantageous to hire dedicated Python web developers as their skillset can be applied so broadly.

It’s fast to develop: Though known to be a ‘slow’ language to execute (as it’s interpreted during run time), Python saves time during the development process, which cuts down time-to-market. In addition, there are indications that Python 3.11 will be potentially twice as fast, thanks to the Microsoft-funded Faster CPython project. This makes Python an even more attractive option so  more companies choose to hire Python developers.

How do I prepare to hire dedicated Python developers?

To help you evaluate if you should hire dedicated Python developers, begin by clearly defining your project’s scope, its goals, and what they will require. Consider the following:

What Skills Should I Evaluate When I Hire A Dedicated Python Web Developer?

With the parameters of your project in mind, you are now ready to find your best Python developer candidates for hiring. But how can you distinguish the best?

While it may be tempting to settle for a ‘jack of all trades,’ your project will proceed much more smoothly with dedicated Python web developers. Generally, here are the fundamentals to look for:

How can I Hire Remote Python Web Developers?

Thanks to advances in online collaboration tools, it’s more feasible than ever for your development projects to be completed remotely by skilled programmers.

When searching for individual developers,  job sites like Stack Overflow, LinkedIn, TopTal, and Python.org can be good places to start. This requires a high degree of coordination to ensure that each individual programmer is bringing the right skill set for the project to the table.

Another option is to work with a development partner who will help you hire python developers for your project, to ensure the best results. They are the best option as they can analyze what your company needs and choose the right team for you.

MDM: How to Build and Deliver Trusted, Relevant, and Authoritative Information Across…

Why Insurers Put Customers at the Center of Their Business