Whenever you need to hook an External GPU to your Laptop, the only option you have is a Thunderbolt 3 port. It can also be used for hooking 4K 60Hz Monitors to your device. But, not all the Laptops have that port & there are some laptops that have the port but, cannot take the full advantage of it. Though, there are also some laptops that are able to take the complete advantage of the port or ports to provide a close-to-maximum bandwidth. So, the question comes forward, “Do you need Thunderbolt 3 in your Laptop ?”. Well, keep on reading… 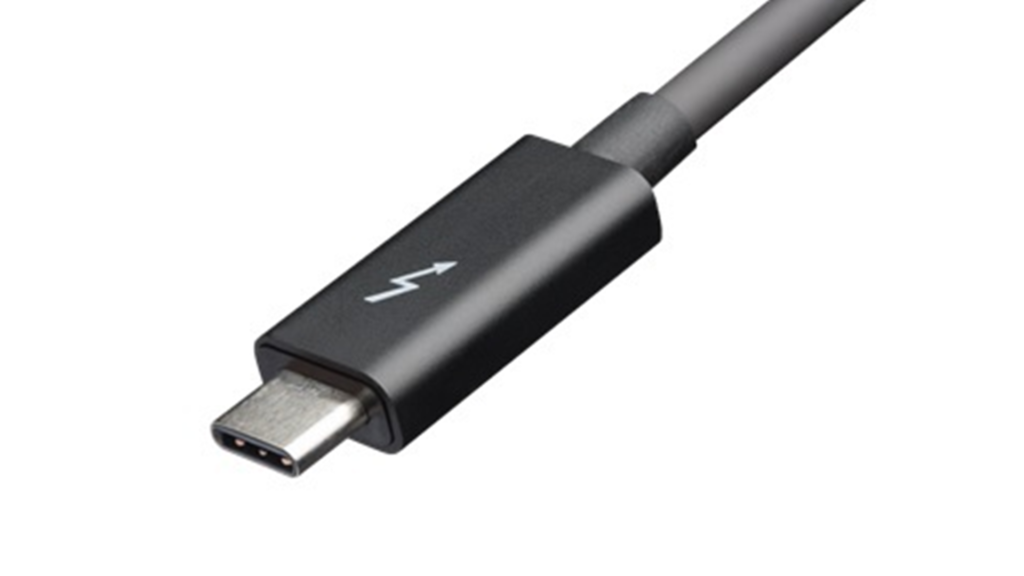 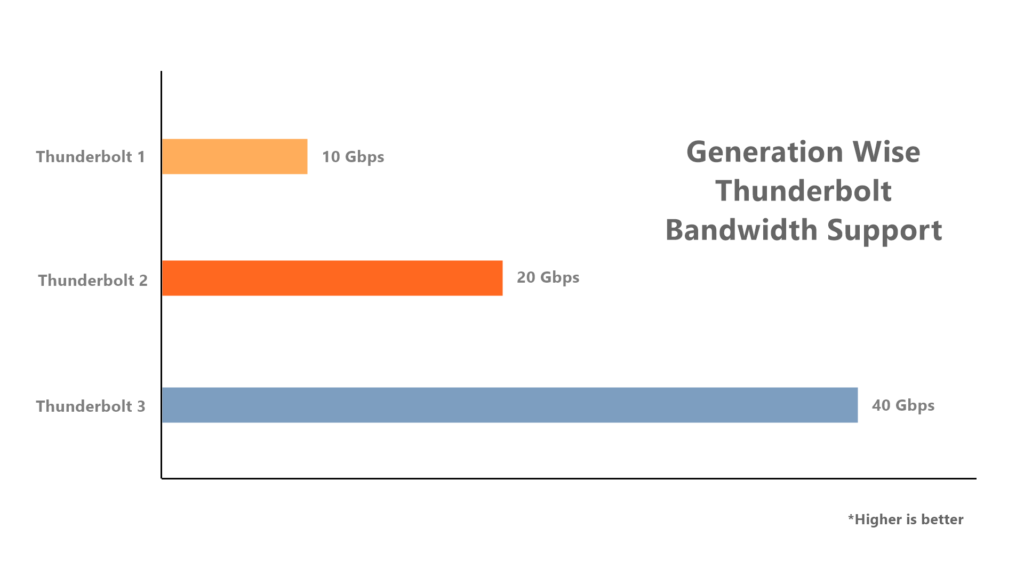 So, as you can see in the chart, Thunderbolt bandwidth has been bumped up to double with every generation. So, with Thunderbolt 1 with we had 10 Gigabits Per Second speeds while Thunderbolt 2 supported upto 20 Gigabits & Thunderbolt 3 now supports upto 40 Gigabits of bandwidth. So, that’s a huge bump up & this brought the possibilities of connecting Two external 4K Monitors & even an External GPU. So, if you want to connect Two external 4K Monitors to your laptop for purposes like content creation you may want to consider dedicated Thunderbolt 3 ports (there can be Maximum 2 of them). But, remember you can also connect a single 4K 60Hz Monitor via. a HDMI 2.0 port. 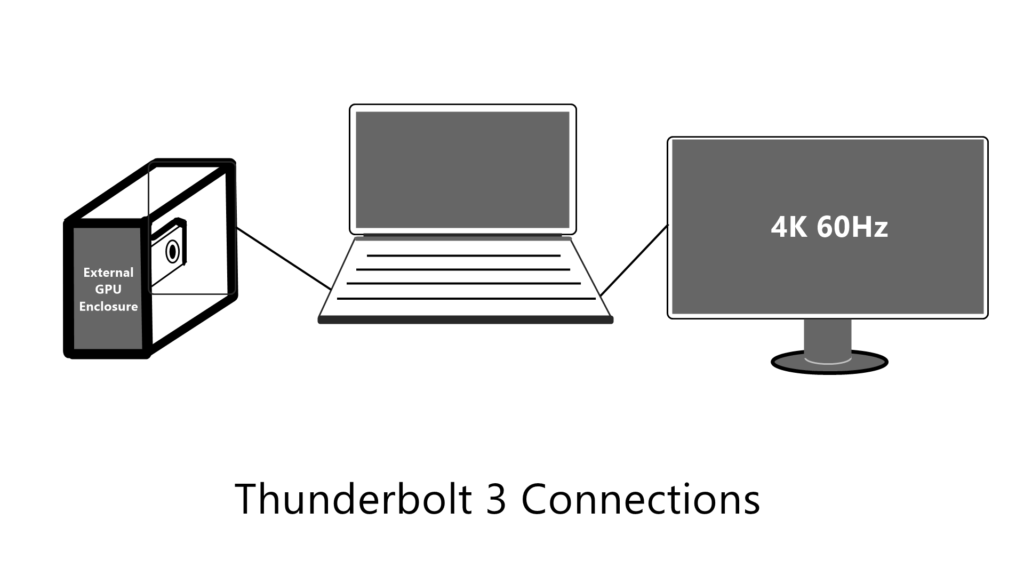 Now, Thunderbolt 3 has another big function & that is allowing external desktop GPUs to connect to a Laptop. I feel this is a reason many people who want to use Ultrabooks but, also game on them look for that Thunderbolt 3 port when they buy their laptops. If that’s your goal, you can definitely take advantage of the Thunderbolt 3 port. But, there are a few things to keep in mind.

To maintain their thinness, Ultrabooks generally use Processors with around 15W TDP that are not ideal for long term gaming sessions. Also, some Laptops use only 2 lanes of PCIe instead of 4 on the Thunderbolt 3 Port. So, you’re not getting the Max bandwidth of 40 Gbps through that Thunderbolt 3 Port instead you’re getting (estimated) less than 20 Gbps. So, that puts the performance of the External GPU into a deep bottleneck.

Even, if your Laptop uses all 4-lanes of PCIe, you don’t get the complete bandwidth of 40 Gbps as some of the bandwidth gets occupied by other peripherals. So, even then you’re loosing 10-15% of the performance of your External GPU. So, if you plan to game on your laptop with the full power of something like a GTX 1080 Ti, it’s just not gonna perform like it would on a dedicated desktop setup. This also applies even if you buy a Gaming Laptop with a lower end GPU & plan to game on an external desktop one. 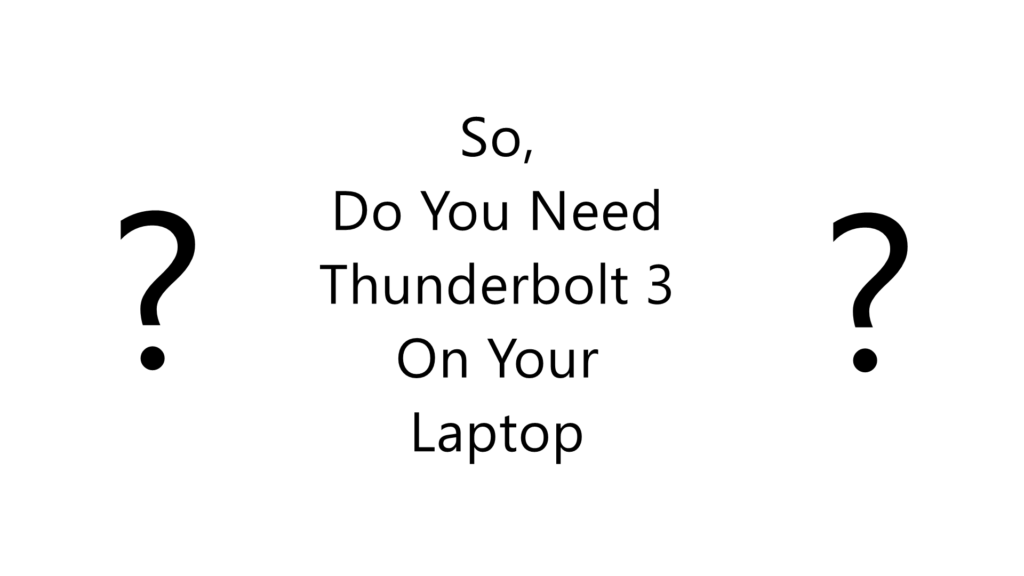 Advanced functionalities are always a plus to have so, if you can get Thunderbolt 3 support on your Laptop then that’s great but, make sure you’re not making compromises on your actual needs.

If Gaming is your main goal then I would not pick an Ultrabook with a Thunderbolt 3 connection for that. 15W i5 or i7 Ulrabooks don’t come cheap & the TDP is not ideal for gaming. So, the extra money that you’ll through at it & an External GPU with Encosure, isn’t going give you the performance you want. Even if you’re doing that in a Gaming laptop with a less powerful GPU, remember that you have to deal with the performance reduction. If you’re ok with that, then no problem.

But, for stuff like Content Creation where you might have an good CPU but, you need 4K Monitors to hook or a more powerful GPU for completing your tasks that’ll cost you a lot less compared to a new Laptop. The Thunderbolt 3 support can be a life saver.

Intel has announced that Thunderbolt 3 support will become royalty free from 2018. So, some Laptops that are using Intel’s 7th Gen Kabylake Processors that uses the Thunderbolt 3 as one of their main USPs & also has a high price tag right now, will cut their prices a bit. So, you may think that it’s better to go for those laptops instead of getting the new & comparatively more expensive 8th Gen CPUs just because of the Thunderbolt 3 support. But, the performance difference between, Intel’s 7th & 8th gen CPUs are way too much to ignore. So, don’t buy the 7th Gen CPUs just for the Thunderbolt 3 port as you won’t be able to justify that minor price difference. But, if you can use Thunderbolt 3 & justify all your needs, you definitely need it in your Laptop. 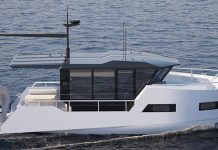 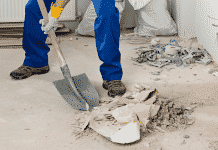 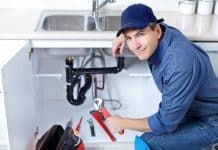