ASUS Zenfone 5 Lite ZC600KL Got Certified In Russia For 2018

ASUS has released quite a few devices in 2017 & most of them actually belong to the Zenfone 4 (4th Generation) series. Looks like they’re all set to launch the 5th Generation of Zenfones starting early 2018.

A new model called the Zenfone 5 Lite ZC600KL has been certified in Russia recently. So ASUS may actually unveil the early players of the Zenfone 5 Series in the MWC 2018. 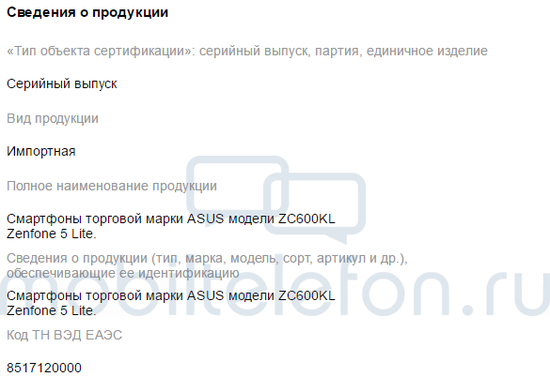 So, as far ASUS naming policy goes, the Zenfone 5 Lite is a 6-inch device that probably has an 18:9 Display so, the form factor should be integrated into a smaller footprint. Also, the device is running a Qualcomm Snapdragon SOC (as it has KL in the ending of it’s model number). Though, we’re not sure what exact variant of Snapdragon it is.

The naming also, suggest that the Zenfone 5 Lite may also come with a Big Battery (ZC series mainly belongs to the Zenfone Max family) & if that’s true then, expect a 4000+ mAh Battery in this device.

The device will be available early in Russia & this is probably the first Zenfone from the 5th Generation to ever exist. However, if ASUS announces a couple of Zenfones in MWC or even Computex 2018, we hope for an 18:9 makeover for most or all of the devices. Also, dual Cameras are definitely going to be another parameter.

ASUS’s ROG Smartphone Is Expected To Be Flipkart Exculusive