The Mate 10 Pro was one of the most hyped smartphones of 2017 & with the good hardware & features, Huawei must have a great Camera to justify both the hype &  the Price tag that stats at 799 Euros. Now, the DxOMark Ratings have been out for the Mate 1o Pro & it has scored a whopping 97 on board. 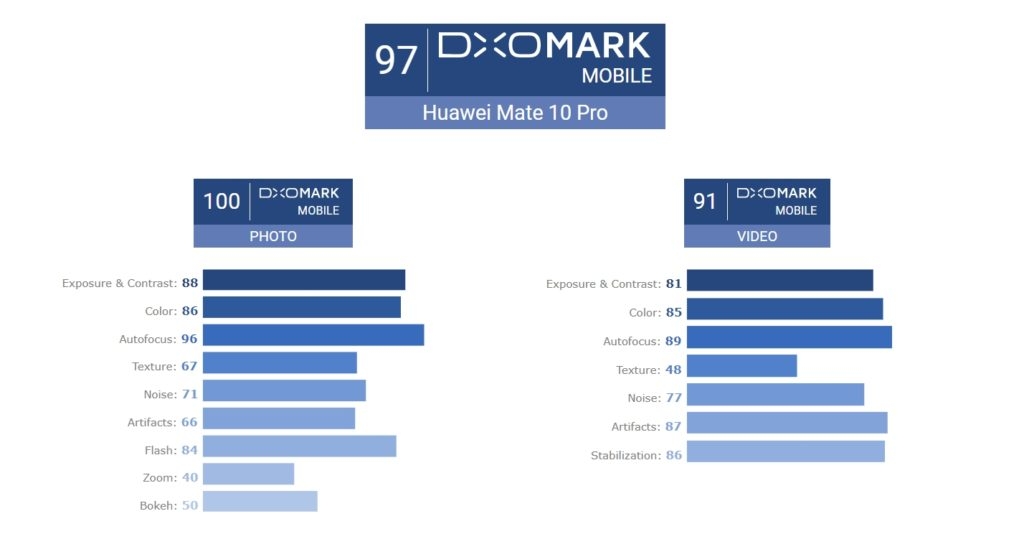 The image above is actually the detailed score listed from the DxOMark website. So, if you weren’t aware then 97 is actually the overall rating but, the results are actually tested in fragments for both Photo & Video capabilities. So, for Photo the Mate 10 Pro scored 100  & for video it scored 91. But, one thing that needs to be clear right now is that, these scores are independent & are not on the basis of “out of 100” . So, if you see Smartphones scoring more than 100 in future,  don’t be surprised.

So, the current leader in Smartphone Cameras is the Google Pixel 2 & Pixel 2 XL with an overall DxOMark rating of 98. The Mate 10 Pro secures the Second Position here with it’s overall score of 97. That actually beats the Note 8 & the iPhone 8 Plus both of which had a rating of 94. So, Huawei has actually done a real good job here.

Though the DxOMark rating is not be the only thing for us to consider it as the best smartphone camera after the Pixel 2 but, what we can actually say is that, Huawei has really done a great job with the Cameras of the Mate 10 Pro. So, smartphone Cameras are getting better and as they keep evolving, we may see a Smartphone to hit 100 soon. so, fingers crossed for that !