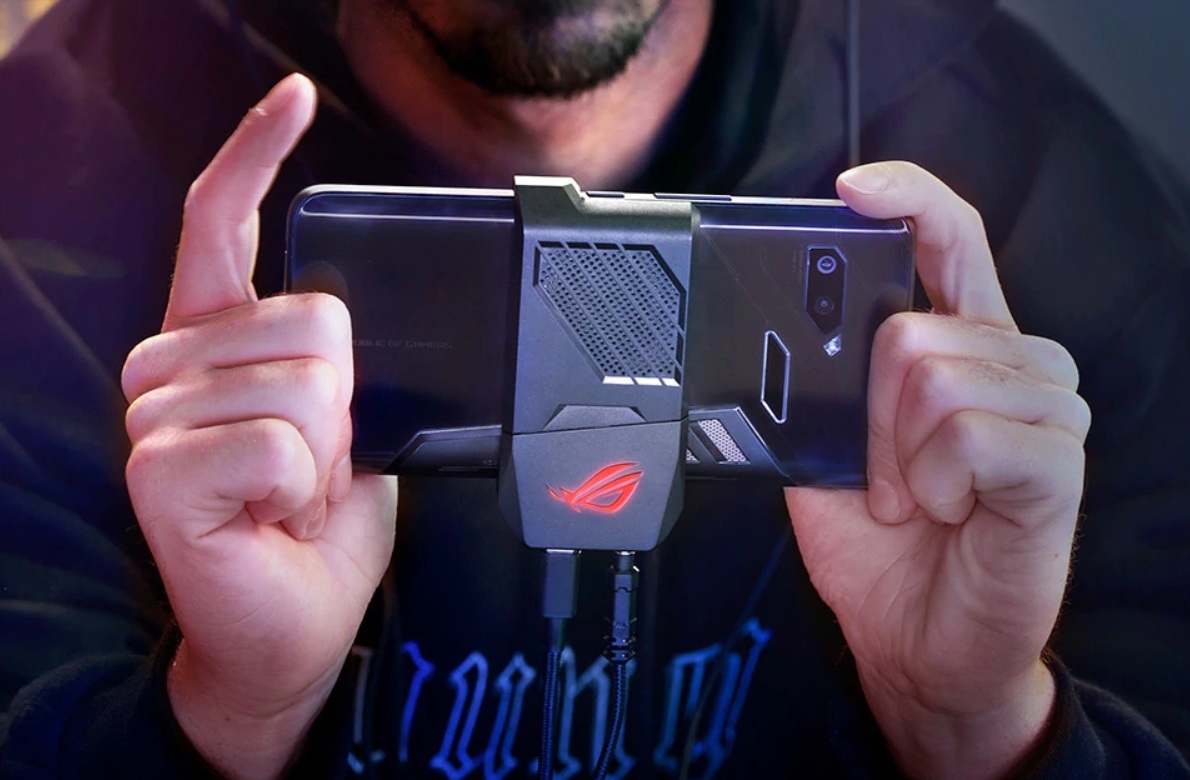 ASUS announced the ROG Phone in Computex 2018 & it is definitely one of the most versatile phones in the the history of Android smartphones. We kinda knew that it is coming but, we weren’t expecting a smartphone revolution by any means. The ROG Phone turned out to be just that revolution. It’s indeed a gaming oriented smartphone but, it shouts out future from every bit of it.

The First AMOLED Display With 90Hz:

The Display is a 2160×1080 (18:9) Display with a Refresh Rate of 90 Hz. So, it’s does not do 120 Hz like the Razer Phone but, instead of using an IGZO panel, ASUS opted for an AMOLED panel which makes it the industry first device with a 90 Hz AMOLED Display. Also, being an AMOLED panel makes it possible to have an 1 ms Response Time which shall be helpful in games.

There is a Snapdragon 845 powering the device but, on this particular device, it has been overclocked to 2.96 GHz which is about 160 MHz more compared to the the stock 2.8 GHz clock speed. To cool this thing properly, ASUS has used a 3D copper vapor-chamber, a copper heat spreader & a carbon cooler which is kinda similar to what they use in their ROG Gaming Laptops. However, the power efficiency cores are kept at the regular 1.77 GHz clock speeds. There is also 8 Gigabytes of LPDDR4X RAM with either 128 Gigabytes or 512 Gigabytes of UFS 2.1 Internal Storage.

The I/O situation is very interesting on this one. As usual there is a USB-C port at the bottom alongside the 3.5 mm Jack & Primary Microphone. There are also two noise cancellation microphones for better Audio Record. However, the main addition has been done to the right side of the device where two USB type-C ports were added to add modular accessories or dock the device to a dedicated docking station. The posts also have support for. There are also programmable ultrasonic buttons which can be assigned as specific controls in games.

Alongside hardware ASUS has also custom tuned the software to make it suitable for gaming. So, there is ROG Gaming UI on top of Android 8.1.0 Oreo. There is a X-mode that can be enabled with a single tap which tweaks the SOC performance & RAM management to boost up the gaming performance.

There is a 4000 mAh Battery with support for Qualcomm Quick Charge 4.0. The USB 2.0 Type-C port at the bottom is capable of 20W Fast Charging while the side USB 3.1 Type-C is capable of 15W Fasy Charging. The supplied power brick is a 30W one but, the device supports upto 20W only.

The Camera situation is identical to the Zenfone 5 & 5z. There is a 12MP IMX363 primary shooter with an aperture of f-1.8 & an 8MP f-2.2 Wide Angle shooter on the back. There is also support for AI scene detection which can detect upto 16 different scenes & objects. In the front there is an 8MP f-2.0 selfie shooter.

As I mentioned before, there are a couple of modular accessories available for the device. Te first one is the Aeroactive Cooler which attaches to the dual USB Type-C ports on the side & helps with cooling when playing games with, it’s dedicated Fan & a thin Heat Sink. It also throws in an extra USB Type-C & a Headphone Jack so the user can charge & attach headphones while gaming without any issues to hold the device while gaming.

There is also a gamepad called the Gamevice which can use the 802.11 ad Wi-Fi built in the device to cast games to your TV with very minimal input lag. Though, you do need the ASUS WiGig Dock to make it work. There is a dedicated Mobile PC Dock which can make the ROG Phone function as a PC on upto a 4K Monitor & it also adds a ton of I/O ports for connecting almost everything you would expect from a full fledged PC including a Gigabit Ethernet Port, HDMI, Displayport, USB 3.1 ports, 3.5 Jacks for Audio in & out & a USB Type-C port for chaging.

There is a TwinView Dock where you can just fit your phone & get & extra Display & two extra speakers which will turn it to a quad speaker system & there is also a 6000 mAh Battery that adds up to the in-device 4000 mAh Battery to extend the Battery life & keep up the second Display & speakers.

ASUS throws in the Aeroactive Cooler in the box but, the other accessories are needed to be purchased separately.

The price is still not official so, though it’s obviously going to be expensive, we can’t talk much about that as of now.  But, we have definitely not seen a phone quite like this. Though, we don’t know why they skipped on the Under-display Fingerprint Scanner or an official IP Rating (though ASUS says it actually has water-resistance) as those would have definitely be appreciated. However, we can already see other smartphone manufacturers aiming for that 90 Hz AMOLED Display or that advanced cooling tech to improve the thermals & bring out better performance.

So, though it was unexpected but, ASUS did set a benchmark for the other manufacturers with the ROG Phone & maybe this will lead to way more advanced smartphones in late 2018 or throughout 2019.

How to Choose A VPN for PC?

How to Fix Connection Problem or Invalid MMI Code On Android

An Introduction to Widgets