Alongside the Snapdragon 845 that is the Flagship SOC of 2018, the new Snapdragon 670, Snapdragon 640 & Snapdragon 460 SOCs are coming for the Mid-range to Budget segment smartphones.

The Highlighting specification sheet for all these SOCs has been recently leaked out on Weibo that show that all of these devices are coming with the newer Kryo 300 series CPUs & Adreno 600 series GPUs. 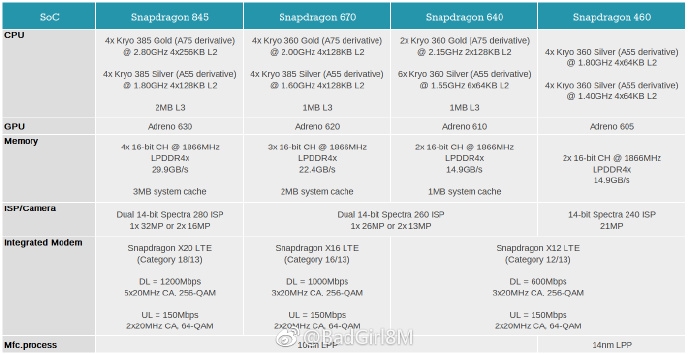 So, these are the direct upgrades to the Snapdragon 660, Snapdragon 630 & the Snapdragon 450 but, so much better in hardware, that we can’t wait for manufacturers to use these SOCs in their Budget & Mid-range devices. These SOCs will probably come out in early 2018 so, we expect to see devices equipped with the Snapdragon 670, 640 & 460 somewhere in mid 2018.